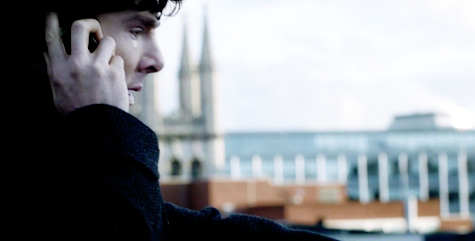 Episode 1: A Scandal in Belgravia

“When did we agree that?”
“We agreed yesterday.”
“I wasn’t even at home yesterday, I was in Dublin.”
“Well, it’s not my fault you weren’t listening.”
“Do you just carry on talking when I’m away?”
“I don’t know. How often are you away?” 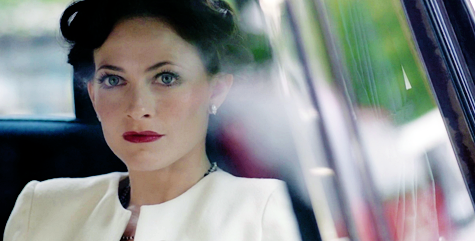 Sherlock returns for series 2 with its protagonist in a bit of a rut. He searches for a case, dealing with a large number of people whose problems are, he believes, beneath his notice, due to the popularity of John’s blog. Soon the episode’s focus shifts to center around Irene Adler, “professionally known as The Woman” (clever!). It seems that Adler is in possession of certain documents and photographs that Sherlock’s client requests to be recovered. This sends Sherlock and John off on a case that involves people of power up to the highest levels, secrecy and perhaps even betrayal from all sides, and the return of the series’ supervillain.

Show creator Steven Moffat has gotten some (deserved) criticism with regard to his women characters (he’s also the current showrunner of Doctor Who, and has faced similar critique for that show), and in this episode that means Adler. Personally, I feel that Sherlock does somewhat less winning and less saving than he is given credit for, and I think that Irene’s sexuality/attraction has less of a role in her “downfall” than some do, but these aspects are still worth being aware of (this is an interesting article, and this blog is another view).

However, whether or not her treatment was positive or negative, Adler was a fascinating character, played with the perfect degree of snark and charm by Lara Pulver. She is just as clever as Sir Arthur Conan Doyle’s original character, with a modern update that is fitting for her role. The focus of this episode is on the relationship between Adler and Sherlock, with some of the other characters—even John—taking somewhat of a backseat, but it works well for the episode. No matter who is the ultimate winner of their game of wits, she proves a more than respectable match for his genius.

As always, I love the little details that tie the series back to Doyle’s canon: I mention “The Woman” before, but the deerstalker hat that Sherlock complains about being photographed in is also a nice touch. The cinematography was also particularly good, whether it was the shadowy, silhouetted figure of Sherlock smoking or the dreamlike sequence where Sherlock falls from a field into a bed. Overall, despite its flaws it was a strong storyline with a lot of tension.

Episode 2: The Hounds of Baskerville

“It’s this or Cluedo.”
“No, we are never playing that again.”
“Why not?”
“Because it’s not actually possible for the victim to have done it, Sherlock, that’s why.”
“Well, it’s the only possible solution.”
“It’s in the rules.”
“Well, then the rules are wrong.”

The original “Hound of the Baskervilles” story was less of a mystery than the BBC’s modernized adaptation. I don’t mean that the final answer was so simple to deduce, but that you didn’t have to be, well, Sherlock Holmes to figure out that there wasn’t actually a large, unearthly dog on the premises. “The Hounds of Baskerville” is more difficult, due to the horror element added to turn it into a thrilling, twisting and turning episode. It begins when Henry Knight (Being Human‘s Russell Tovey, who has apparently cornered the market on British television involving large canines) comes to them with a report of a gigantic hound at the Baskerville testing site.

Sherlock and John head to Dartmoor to investigate, discovering that the location is used for various experiments, some of them including animals or chemicals. Although John is incredulous at first, and Sherlock predictably even more so, they soon get caught up in the mystery themselves when, at night, John is separated from Knight and Sherlock and he sees the hound. Sherlock, too, has an encounter with the beast, although he claims to see nothing.

The episode strays far from the original story, but the way it has been modernized is very effective in creating the horror movie feel. Sherlock is at his worst this week, his arrogance over the top enough that even John calls him out on it, but it provides an interesting contrast to the fear he feels (and tries to smother), and his interactions with John range from the caring to the heartless in all their extremes. Plot-wise, the climax of the story is well-developed, with clues throughout the episode leading up to the big reveal.

Tiny details: Sherlock’s cocaine addiction from the stories has been replaced with a smoking habit, and cigarettes are apparently “7 percent” more effective to him than tea. He also tries to convince John to give him some by offering the next week’s lottery numbers.

“Nobody could be that clever.”
“You could.”

Alright, I’ve got to put this under a “read more” link because there’s no way I can talk about this episode without some major spoilers.

As most people probably know (if not from reading the stories, then from Guy Ritchie’s Holmes sequel, A Game of Shadows, which also used a “Final Problem”-inspired plot), Doyle’s story culminated in a literal fall, with Moriarty and Holmes tumbling off the Swiss waterfalls to their (intended) deaths. In this episode, the fall is more of a metaphorical one, with a plot to make Sherlock appear to have staged the crimes he solves for media attention and power. Of course, it is masterminded by Jim Moriarty.

At first, the cases with which Sherlock is involved seem straightforward, but Moriarty, with the help of reporter Kitty Riley, several assassins, and a few others, including Sherlock’s brother Mycroft, the plot thickens into a tangled web (fitting, as Sherlock describes Moriarty as “a spider” early in the episode). Knowing that Moriarty has a hold on him, Sherlock turns to Molly Hooper, who sees through his facade and works to help him.

The climax occurs, not on top of a waterfall, but on the roof of St. Bart’s hospital, where Moriarty threatens the lives of Sherlock’s friends—John, Mrs. Husband, Lestrade—if he does not throw himself off of the building and die with the public believing he is a fraud and a criminal. Sherlock tells him that he will be able to convince Moriarty to call his assassins off, and Moriarty agrees before forcing Sherlock’s hand in a way that leaves only one outcome.

The two scenes that follow—Sherlock’s death and John’s mourning—are the two most emotional and well-acted in the series. There were a couple of scenes this season where I’ve thought Benedict Cumberbatch was overacting somewhat in his portrayal of Sherlock, but there was none of that here. In his final phone call to John, standing on the street below, he sounds utterly heartbroken as he tells him that everything they’ve been saying about him is true, that he is a fraud. Even more impressive was Martin Freeman’s performance as John, not believing Sherlock’s lie, and particularly in the graveyard afterward, hoping that somehow, Sherlock is not really dead. He isn’t, of course, and I’ve got some theories on how he managed it, but it doesn’t make the end of the episode any less powerful.

Freeman and Cumberbatch weren’t the only ones with excellent acting in “The Reichenbach Fall.” Andrew Scott’s Moriarty has been delightfully psychotic throughout the series, and he was particularly sinister in this episode. And I also loved Louise Brealey as Molly Hooper; she has been fairly naive in the past due to her feelings toward Sherlock, but this episode showcases her insight and how capable she is at her work. As usual, the cinematography was also fantastic; I could rewatch the shots of Sherlock and John reaching for each other during their phone call on a loop forever (although eventually I’d become dehydrated from all my crying).

This was, without a doubt in my mind, the best episode of Sherlock so far and an all-around excellent episode of television. I can’t wait to see what happens next (and I was glad to see that Steven Moffat hopes to air a third series before the end of the year; I don’t think I could take another wait as long as the one between series one and two).

P.s. I’ll take it over any Sherlock Holmes-inspired show CBS is planning any day.