¡Hola! Estoy en Sevilla y me gusta mucho. I arrived in Madrid on Thursday morning and I took the AVE train to Seville. After a night in a hotel, I met my roommate Kelsey and we went to our “homestay” to meet our Señora Ana. We live in her apartment and she makes our meals, rather than staying in a residencia (a dorm). She is very nice, and she doesn’t speak much English so it is good for us to have the chance to practice our Spanish.

Seville is very beautiful. There are orange trees all along the roads (although Kelsey and I found out the hard way that the oranges aren’t good for eating—so bitter!) and although it was cold for the first couple days it’s warmed up a lot and the weather is really beautiful.

Something that definitely took some getting used to was going out at night during the weekend. When I studied in England I took a trip to Madrid and so I had at least experienced it once before, but in case you don’t know in Spain they go out very late. We didn’t even leave for the city centre until after midnight! But there were plenty of bars open and we met up with other students who live closer to the centre (I live in Nervion; it’s a beautiful neighbourhood right near the estadio del futbol, but it’s about a 35-minute walk from the city center… and the school, unfortunately). All of the bars we were at closed around 3, but apparently there are plenty that are open until 4, 5, even 6am! Still, for our first weekend, getting home by 4 was fine with us.

Yesterday was my first day of classes, and that was another thing I had to get used to. You see, I’ve always been pretty crafty with my schedule and so I haven’t had classes on Fridays since fall of sophomore year, and I haven’t had a class before 10am since that same semester. This semester… I have both. I am taking Advanced Spanish 1 from 9-12 on Monday-Friday, and Oral Communication from 12:15-1:30 on Monday, Tuesday, Wednesday, and Friday. Something else I haven’t done in a long time is take a dance class, but this semester I’m in Regional Folk Dance (aka Flamenco!) twice a week. 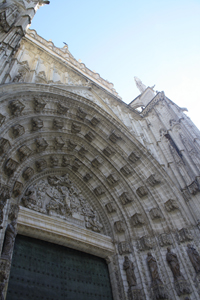 I’m really looking forward to this semester. There are some great trips run by the school (I’m going on the trips to Cadiz, Gibraltar, Doñallo, and Granada) and plenty to do in and around Seville. I’m also hoping to travel a little bit in Europe. And of course, I’ll be hablando mucho español. Or at least Spanglish.