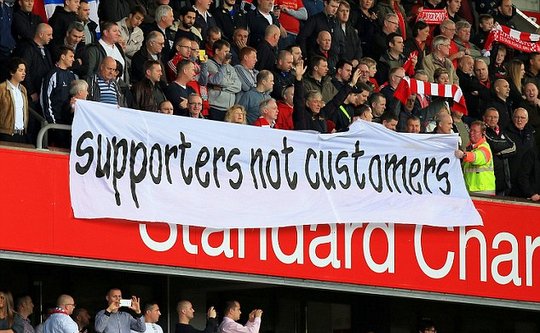 Note: This is an email I sent to Liverpool FC regarding their participation in the newly-announced “European Super League.” If you support one of the clubs announced to be a part of this league—AC Milan, Arsenal, Atletico Madrid, Chelsea, Barcelona, Inter Milan, Juventus, Liverpool, Manchester City, Manchester United, Real Madrid, and Tottenham—please consider sending a similar message to your club.

“At a football club, there’s a holy trinity – the players, the manager and the supporters. Directors don’t come into it. They are only there to sign the cheques”

By some metrics, I am a new fan. I have “only” supported Liverpool for a decade and a half or so. However, I fully intend to support Liverpool for my whole life with as much love and passion as I have so far.

Or at least, that’s how I felt before I read about Liverpool joining the European Super League, which I feel is a greedy, soulless plan that goes against the spirit of football, the spirit of Liverpool, and all the values that made me fall in love with this team.

Even as a “newer” fan, I have seen this team through lows and the highest highs—from years when they held the Champions League trophy aloft to seasons when they have failed to even qualify for Europe. I’ve watched them narrowly miss out on their first league title of the Premier League era, and I’ve watched them finally win that elusive, triumphant title in a year in which fans were not able to witness, parade, or celebrate with the team.

At yet, even as we all sat at home at the end of last season, our love and connection with Liverpool stayed strong. Now this European Super League plan threatens to sever those ties, choosing connections with money and power over connections with fans and community.

Like many, I have felt somewhat disconnected to football this season due to the strange atmosphere and emptiness of the fanless stadiums, but I fully expected things to go back to normal in the future, when we’d all return to singing and supporting on the Kop, in pubs around the world, at home with our friends. And then this. I’m no fair-weather fan, and I didn’t think there was anything that could put a damper on my love for this team, but the news of a European Super League does not mesh with the Liverpool I love.

I realise this has been a long time coming, with massive sponsorships, TV deals, and so on along with rising ticket prices putting finances at the forefront for the most well-known clubs. And indeed I have benefitted from it in some ways—my first Liverpool game was against Tottenham on a pre-season tour of the States. Nobody who went to that match could argue that a friendly in 35C heat and sweltering humidity in a stadium in Baltimore was purely for the love of the game rather than to make money and attract new global fans.

And I realise that the number of fans Liverpool will lose if they join the ESL will probably be balanced out by the droves of new fans that will pour in to watch Europe’s top teams play week in and week out, and so maybe our pleas will go unheard. Of course I have nothing against new fans—I want everyone to become a fan of the team I love so much! And I obviously have nothing against foreign fans as I am a foreign fan myself.

But part of the reason I connected so deeply with Liverpool was in learning its history and its place in the local community, and a league that caters to fans with money rather than fans with passion (whether they are from Liverpool or elsewhere) ignores that importance in favour of short-term income gains.

As someone who still remembers being a brand new fan, who still remembers the feeling of my early days watching and falling in love (and often, during that time, feeling heartbroken by) this team, learning who the players are, discovering our history, learning about our rivals, learning our songs… new fans who find Liverpool through the European Super League will not be discovering the real Liverpool, but only a copy that shares its name, lacking the essence of what makes this club and its supporters great.

I urge you to reconsider this plan, out of respect to your fans, your city, and the history and heart of this club.