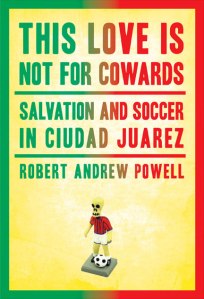 I don’t know much about the Liga Mx. I follow the English Premier League and the Spanish Liga, and I’ve even started watching a bit of Bundesliga recently (although I’ve yet to find a broadcast with English commentary so the only words I can pick up are things like “Dortmund” and “das fitness coach”), so I hardly have time to watch yet another league anyway, although I sometimes catch a match on Univisión while I’m at the gym. I know a few key words and names in Mexican football, Hérculez Gómez and Chivas and Chicarito and the Azteca, but comparatively, I’m in the dark. Before reading Robert Andrew Powell’s gripping book, This Love is Not for Cowards: Salvation and Soccer in Ciudad Juárez, I had certainly never heard of Los Indios de Ciudad Juárez.

After reading Charles Bowden’s Murder City in a journalism class last semester, if I’d had to guess I would’ve said that Juárez wouldn’t have time to play football in between all the murders. This would probably be a commonly-held thought but, as Powell’s book shows, there is more to Juárez than just violence and death, even if these elements are intrinsically linked to everything in the everyday life of a Juarense. The violence and death is ever-present, of course—there’s no ignoring the thousands of bodies that turn up in Juárez each year, some in front of Powell’s own house, he recounts chillingly—but the book paints a fuller picture of life in “murder city” than most people would guess.

Los Indios de Juárez are a story of epic success, getting promoted to the Primera division in 2008, and massive failure, immediately losing enough games to be relegated back to the lower leagues. Powell follows the team through their rare highs and constant lows, getting to know the club’s president, coaches, midfielder Marco Vidal, and particularly the supporters group which loves los Indios obsessively despite their nearly endless losing streak. Its the moments with this supporters group that are most interesting, from their decision to call themselves El Kartel in a joking reference to the gangs that control the city, to their decision to change the name after one of their members is caught in the crossfire of actual cartel violence.

Like most great sports books, This Love is Not for Cowards is not only a series of match reports but a look at the culture of the team and its supporters. Powell chronicles the team’s journey toward inevitable relegation but also his own passage from outsider to Juarense. One of the book’s most powerful scenes is the moment when the author realises that he is out having fun on the same street on which several people were murdered just the day before. The violence that permeates Juárez does not lose its horror, but its presence becomes a part of life, as certain as the knowledge that los Indios are unlikely to win their next game.

Despite the horror of the endless killings and the dejection of los Indios’ failure, This Love is Not for Cowards also captures the hope of the residents of Ciudad Juárez: hope for their city, for their futures, for their fútbol team. There are some digressions which seemed out of place—the chapter on the murder of women in Juárez was interesting enough to be a book on its own but did not fit well with the rest of the story—but overall it is a tightly-written, clever piece of journalism. Los Indios are gone, the club dismantled in 2011, and the massive murder statistics remain, but This Love is Not for Cowards remembers the team as another facet of the most dangerous city in the world.