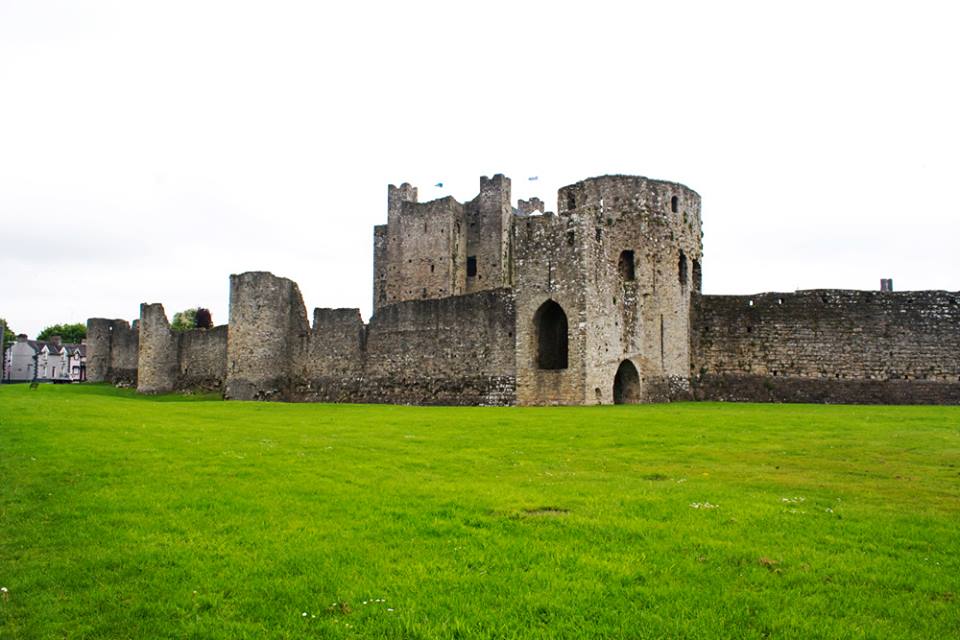 After General Leia, Finn’s face, and those cute little floofy owl creatures, the star of The Last Jedi was surely Skellig Michael. Throughout the film, magnificent shots of the Irish island punctuated the intergalactic action.

While this little island is now famous worldwide as the hideout of Luke Skywalker, it has always been an important part of Irish history. The site of an ancient monastery, it is also well known as a conservation area for an array of seabirds such as puffins. Skellig Michael can only be visited from May to October because of the rough ferry route, and unfortunately I haven’t had the chance to explore it yet, but while I was in Ireland this fall Steve took me around the Ring of Kerry and we were able to see the Skelligs (Skellig Michael and its smaller companion) in the distance. 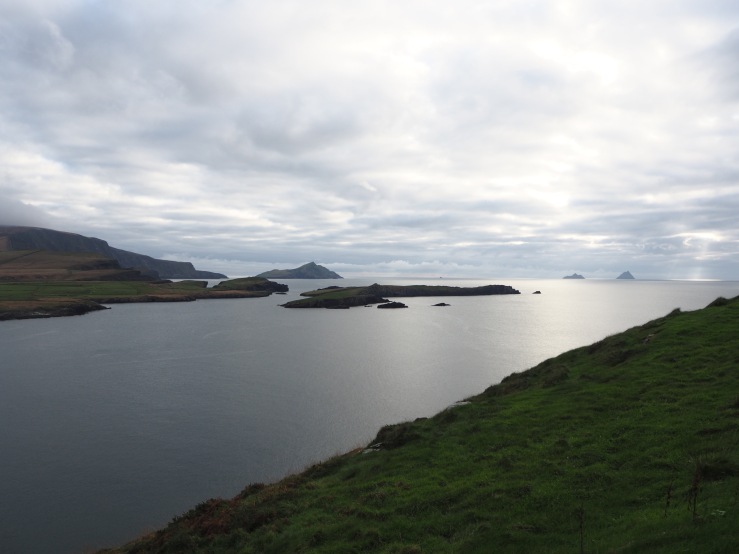 I’m sure I’ll get the chance to explore Skellig Michael and its craggy, epic cliffs at some point in the next few years, but there’s no shortage of impressive historic sites in Ireland, and I have been lucky enough to visit a number of them. Here are a few of my favourites.

Stonehenge may be the most famous example of a neolithic site in the British and Irish isles, but it’s also one of the most overrated. You have to drive nearly two hours from London to walk around a largely unimpressive circle of rocks—at a distance and on the other side of a cordon, mind. Newgrange, on the other hand, is a chance to get up close and personal with a way cooler instance of neolithic architecture and design. This site is located a mere 45 minutes from Dublin and consists of a circular mound with an underground passageway made of stone that you can actually enter. 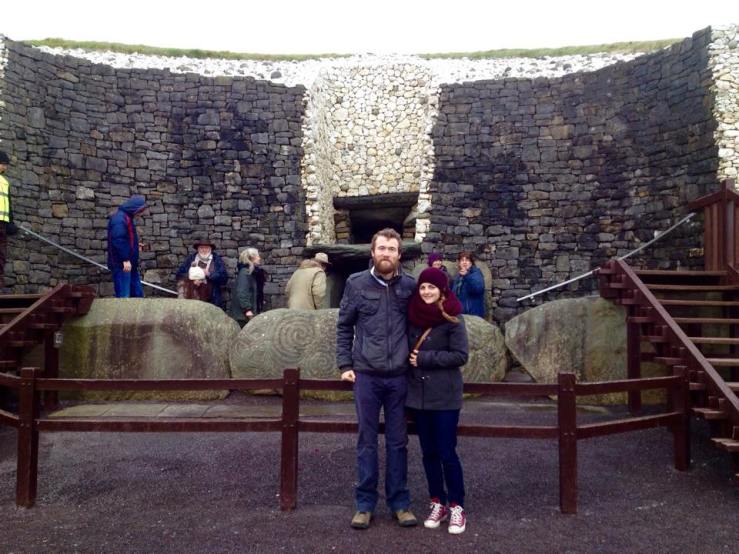 The most notable feature of this site is that the upper entrance of the mound aligns with the sun on the winter solstice so that a ray of light shines through into the inner chamber. To be inside the mound on this special day, you have to enter a lottery on your visit, and one of the reasons this site holds such a place in my heart is that I was actually lucky enough to win the lottery while I was living in Ireland. Unfortunately, the weather was too cloudy (in Ireland in December? You don’t say!) for any sun to make its way into the chamber, but it was still an incredible experience to know that we were standing in the same place, doing the same thing, as those who lived five thousand years before us. 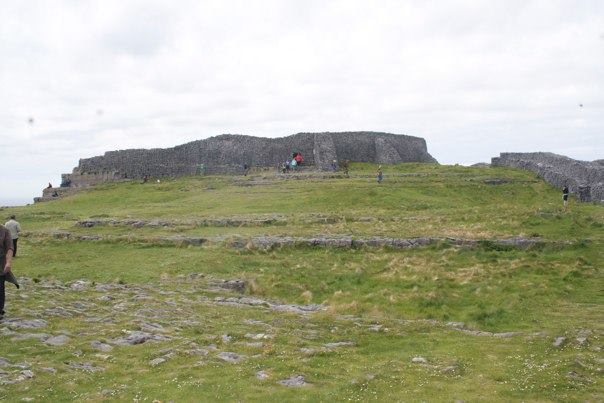 My other favourite historic site in Ireland is Dún Aonghasa, mainly because of its location. On the cliffs of Inis Mór, the largest of the Aran Islands, Dún Aonghasa looks out over the sea as the waves crash below against the rocks. Built sometime in the Bronze and Iron Ages, this towering fort stands watch on the island and offers an important archeological addition to Inis Mór.

A visit to the Aran Islands is a must if you have the time, although it’s important to note that the ferries may not run if the weather is very bad. If you’re in relatively good shape, I recommend cycling the island; you will be extremely tired and sore at the end of the day, but it’s the best way to see its length and reach Dún Aonghasa. Inis Mór is the only one of the islands I have visited so far, although I plan to return and see the famous, far more modern, shipwreck on Inis Oirr in the future.

Said to be where the original High Kings of Ireland were coronated, the Hill of Tara is near Newgrange in County Meath and fairly easy to visit on the same trip or on a short jaunt from Dublin. Featuring a number of neolithic structures including a smaller passage tomb, a church, and an array of ring-forts, this area formed the seat of the High King. It saw various uses between circa 2000 B.C. and 1100 A.D., although many of its structures are only runs today.

I visited the Hill of Tara in late December, after our winter solstice trip to Newgrange, so you will not be surprised to hear that it was pouring rain and freezing cold. The field was extremely muddy and we had to drive all the way back to Killarney that day, so we didn’t stay too long. However, I would still recommend a visit to the Hill of Tara if you’re in the are and interested in Irish history.

The most striking aspect of Muckross Abbey in Killarney, Co. Kerry is a large yew tree in the courtyard of this 15th-century ecclesiastical site. Yew trees can live to be over a thousand years old, and it’s likely that the abbey was built around this specimen, rather than it being planted upon completion of the structure. Yew trees figure large in pre-Christian and pagan mythology, and it seems possible that some of these folkloric beliefs carried over to the monks who built the abbey. With very little light reaching the interior hallways of the abbey, the sight of the tree reaching its branches up through the stone architecture is slightly eerie, especially paired with the superstition that touching it brings bad luck.

Muckross Abbey is in Killarney National Park, which in my opinion is one of the most beautiful parts of Ireland, and definitely worth a visit. Whether you’re interested in hiking or history, the nature and the array of buildings there will satisfy your needs. Killarney is also the start of the Ring of Kerry, so it’s a great place to visit before or after you circle the ring. Plus, there’s a golf course if that’s your kind of vacation thing. 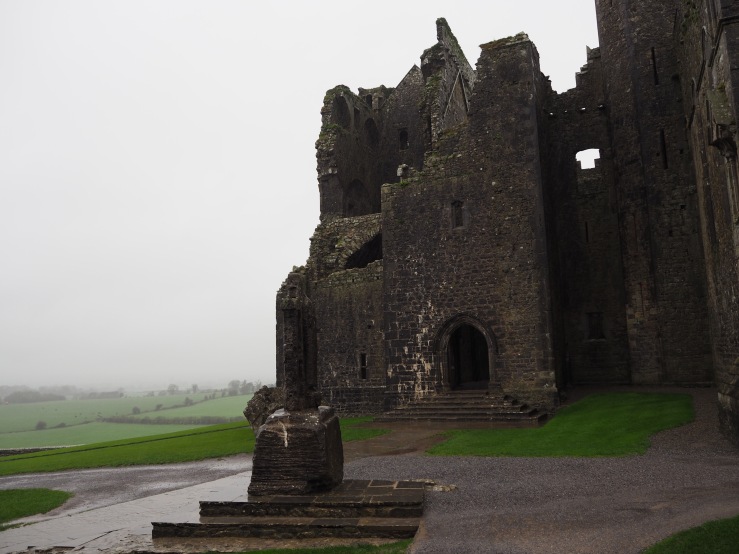 Unlike the Blarney Stone—which, I have been told, is frequently urinated on and so you should not kiss it—the Rock of Cashel is not merely a rock but also an imposing historic site located on the top of a steep hill in County Tipperary. The rock is said to have been thrown in a battle between Satan and Saint Patrick, and it was the historic seat of the Kings of Munster in pre-Norman invasion Ireland. At the site are the historic cathedral and chapel, as well as a small but interesting museum of early Celtic art.

I mean no offense to folks from Tipp, but apart from Cashel it’s not a huge tourist destination. Steve and I took a detour on the way from Limerick to Killarney to visit a friend, and so we took the opportunity to head to the Rock to check it out, but for the most part it’s probably not somewhere most tourists would plan a trip to. However, it is right on the way from Dublin to Cork, and so it’s worth stopping off if you’re traveling from one city to the other.

There are a lot of castles in Ireland. A lot. Trim isn’t necessarily the easiest to visit (that would probably be Dublin Castle, as it’s right in Dublin, walking distance from Temple Bar and other main tourist attractions) or the most impressive (I’m sure I haven’t seen most of the castles in Ireland, so I couldn’t tell you which one is, although the Rock of Cashel is definitely up there for its impressive location atop its hill).

However, this 12th-century Norman castle is conveniently located in Meath if you’re driving from Dublin to Galway, and unlike many castles that lie in ruins, this one is fairly complete and you can even climb the steps to the second floor and look out over the parapets when you take a tour. It’s also famous for being a major filming location for the movie Braveheart, if that’s something on which you base your vacation itineraries.

Two final additions to this list of best historic sites in Ireland are ring-forts and the National Museum of Ireland. Ring-forts, as the name suggests, are circular stone forts built all across Ireland (and other countries in Europe). Today they are in various stages of ruin, with some having been reconstructed (like this one pictured near Kells that has had its walls rebuilt so you can climb to the top) and others being left as they were. You don’t really need to go out of your way to visit a ring-fort, as if you are traveling Ireland you will likely come across one. 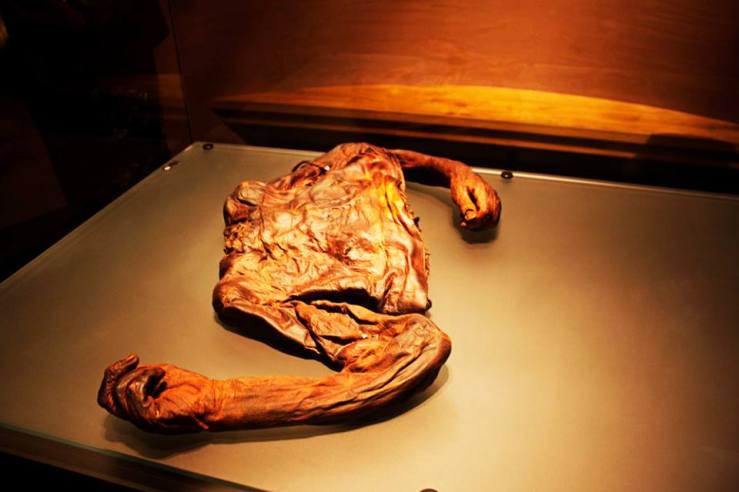 The National Museum of Ireland is not a historic site but needs a mention because of its incredible bog bodies exhibits. Due to the nature of the peat bogs that make up much of Irish soil, items that would normally decompose are instead preserved. This has led to the discovery of textile artifacts as well as mummified human remains. In some instances, these corpses are a result of war or ritual sacrifices by the neolithic peoples of Ireland. A sometimes unsettling yet essential addition to your historic tour of Ireland.