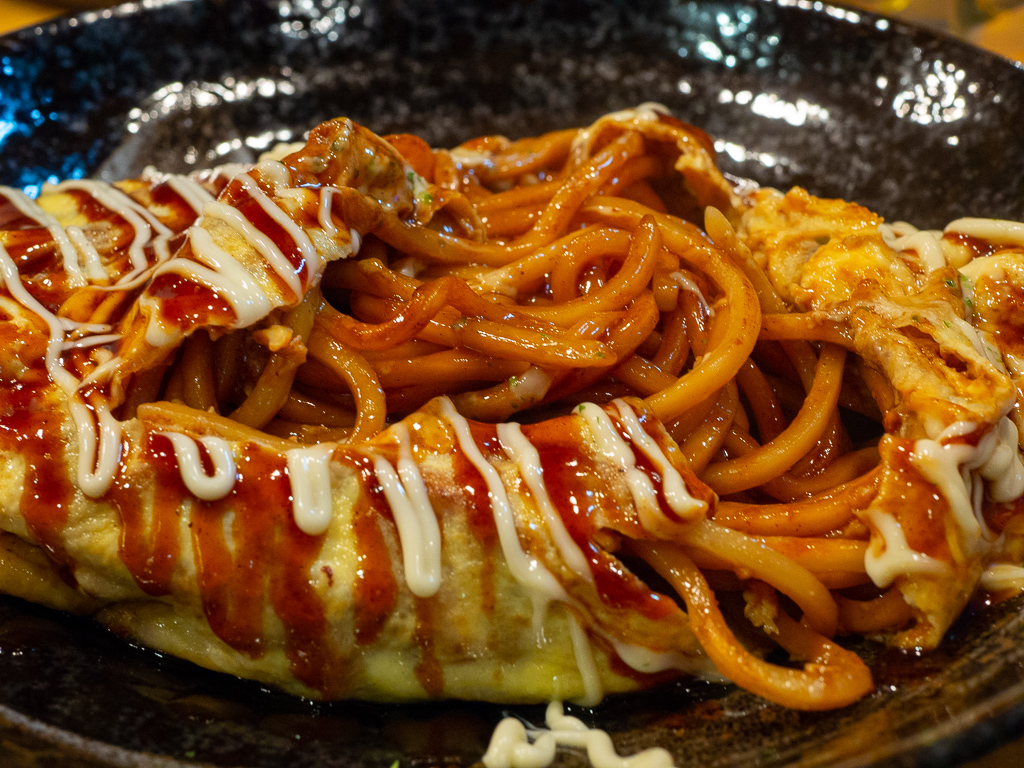 Osaka is such an interesting city. Significantly smaller than Tokyo (2.7m people compared to the bulging population of Tokyo’s 9.3m) but double the size of cities like Kobe and Kyoto, it doesn’t feature the high-tech, futuristic style of Tokyo or the classic look of Kyoto, with their modern and traditional areas separated carefully, but instead mashes up new and old into one. Although it got just edged out by Kyoto as my favourite city we went to in Japan, it was probably the one I was most excited to visit (and if you have any wonder why, just read my “What we ate” section below).

If you missed my posts on Tokyo and Hakone/Nara/Kobe, check them out! Otherwise continue on for my recommendations on Osaka:

Where we stayed: Osaka Guesthouse Midoriya

I cannot recommend Osaka Guesthouse Midoriya enough. We arrived to Osaka around midday, while the hostel was closed for cleaning, but the owner, Yoshi, was kind enough to let us in so we could leave our luggage until evening. He provided us with a map of the area, advice on things to do and see, and was just generally so nice and welcoming. The hostel itself was also lovely, super homey and cosy. The Japanese-style rooms were comfortable and the street was very quiet so we got a good night’s sleep. It’s within walking distance (~30 minutes) of Osaka castle which is great for beating the crowds in the morning or seeing it illuminated at night, and close to the train as well.

On the recommendation of Yoshi, after an afternoon of eating we went to Osaka castle at night to see it lit up. It’s situated in the middle of a beautiful grounds and gardens, so we wandered around for a while. There were a lot of stray cats, and I was pleased to see they were all eartipped (a sign they are being taken care of through a TNR program). The next morning we headed back to walk around the grounds again before the castle opened, and then went inside. I had read disappointing reviews that the castle didn’t have any of it traditional look on the inside as it had been converted into a museum, but it was still pretty cool. We went into town to see the famous Namba Yasaka Shrine with its impressive lion’s head design, before heading out to Nara for the afternoon.

Osaka is known as the foodie city of Japan, so we spent even more time eating here than anywhere else. Our first stop when we arrived was Izakaya Toyo. Just before we left Australia we watched the episode of Netflix’s Street Food about Osaka, and we really wanted to visit the restaurant (an outdoor kitchen and set of tables on a neighbourhood side street) featured. Toyo is as much of a character in real life as he is in the episode, lighting his cigarette with the blowtorch he uses to braise delicious tuna cheeks, chatting and shouting with the patrons, and turning out incredible food.

In central Osaka, in Dotonburi, we hit up more street food stalls. Our favourite was the takoyaki at Takoyaki Wanaka. These doughy balls of batter and octopus are fried until piping hot and then covered in mayo, green onions, and a delicious sauce. We also got yakisoba (I had mine served in an omelet which I tore apart with my chopsticks to reveal the noodles inside) and curry (from a shop that Anthony Bourdain featured in the Osaka episode of No Reservations—although it wasn’t my favourite, I always have to go somewhere Tony went if I know he did an episode there).

Remember how I said in my Tokyo post that the best food often has a long queue? On our first night, we saw a huge line slinking down a staircase and into the street, and on the second night it was us who were waiting over an hour to gain entrance into Ajinoya. But when we finally got in, there was no doubt it was worth the wait. The restaurant serves Okonomiyaki, a sort of savoury pancake that can be filled with anything from cabbage to pork to seafood to yakisoba. I got mine with squid and shrimp, added noodles, and topped it with a fried egg, all of which the chef cooked on the teppan grill in front of me. It was probably my favourite thing I ate in all of Japan, and while I’m sure there are other great places for Okonomiyaki, I’d definitely recommend this one despite the queue.

One special mention for one of the many Irish pubs we frequented in order to watch the rugby. Apart from the pub showing Liverpool (if you’re a LFC fan visiting), I’d recommend to stick to non-British/Irish pubs for the most part as the beer is cheaper and the clientele is local, but this pub in Osaka, amusingly called The Local, in fact, is worth a visit. The bartender/owner Steve is an entertaining fellow and there were generally good vibes. One thing to be warned of in pubs in Japan (Irish and otherwise) is that smoking laws are a lot more strict outdoors but often a lot less strict indoors—while you won’t see people smoking on the streets, many restaurants have a smoking section and many pubs allow smoking throughout.

I can’t believe I have FOUR posts of recommendations about Japan, but there was just so much to see! Come back for the last one, Kyoto, tomorrow, and don’t forget to tell me your recommendations as well! xx