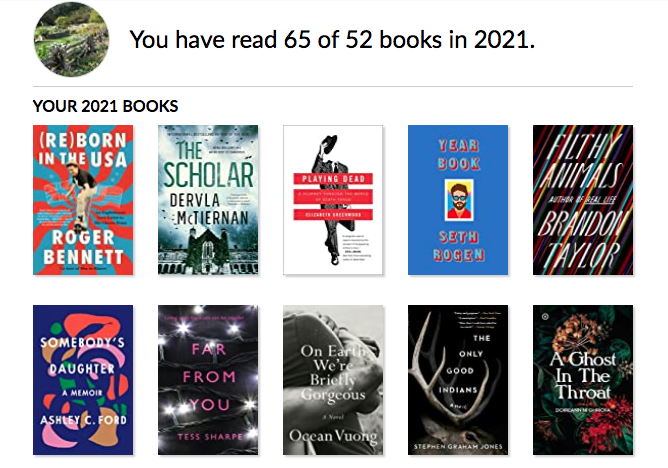 Oops, I forgot to post this last month! So here’s a double-header of all the books I read in June and July. Some really fantastic ones in this batch, but there’s one that stands so far above the rest I’m putting it above the ‘read more’ line (also, it’s hard to categorise as either fiction or nonfiction). Read on…

A Ghost in the Throat by Doreann Ní Ghríofa

A novel about a woman who becomes obsessed with a poem by an 18th century noblewoman, what she sees as parallels in her own life, and her efforts to trace the woman’s history and descendants, in some ways it’s difficult to describe what makes this book so exquisite.. Is it the richness of the prose, by an author who is mainly a poet and who shows this through the lyricism of even mundane, minor moments? Is it the way it melds genres—it’s won awards in fiction and nonfiction categories, it’s part biography and part memoir and part translation and part novel and it plays with all these styles in a compelling and intriguing way? Is it the way the plot draws you in? Every time I picked up the book to begin reading again, I immediately felt as invested in the narrator’s search for evidence of Eibhlín in marriage records and death notices and the periphery of other people’s lives. Of course, it is all these things and more, and the result is an incredibly special book. Perhaps my favourite of the year so far, and one I will be thinking about it for a long, long time.

The House in the Cerulean Sea by TJ Klune

I have to admit I was the tiniest bit skeptical of this book when I began, worried that it would be too treacley sweet, but I was mostly won over by the charm of the whole thing. The child characters are wonderfully unique and dimensional in their feelings, quirks, and dreams, and while I didn’t feel the adult characters—including the protagonist Linus—were as fully realised, they worked as a vehicle to move the story along and explore the world anew. The writing is lovely, with great imagery throughout. I found some of the storylines seemed to wrap up a bit too quickly and neatly, but it fit the fairy tale vibe.

The characters in this novel are difficult to love. It’s not that they are unloveable; it’s that they are written with such depth that their flaws are on full display and you must love them warts and all as you would love a real person. Though I found a lot of tenderness in my heart for Amy/Ames and Katrina, I’m not sure I ever found my way to loving Reese, but it’s not a novel where you have to find your way to loving every character, just as you wouldn’t love every person you meet in real life. You do have to be interested in all of them, though, because the plot is thin and oddly paced, only a vehicle for an intense character study. Luckily, there could hardly be a more fascinating group of characters. Chaotic is a good way to describe the writing style. It’s overwritten in points, but crackles with energy for the most part. A bold, intriguing read.

Far from You by Tess Sharpe

On the surface, this book is a whodunnit—it begins with the protagonist being discharged from rehab a few months after her best friend’s murder, and follows her quest to discover the identity of the killer. But what it really is, is a story about grief, as Sophie learns to live with losing the girl she loves. Sophie is an incredible protagonist, flawed, complex, and compelling. The secondary characters—Mina, in flashbacks, and her brother Trev, in the present day of the narrative—serve as perfect foils to a fantastically interesting main character. The murder mystery plot doesn’t bring as much suspense as I would have hoped for, but this is really a story about character growth, love, and loss, overall, and on that level the novel succeeds completely.

The writing is stunning: wistful, intimate, and raw. This novel is worth reading for the style alone. However, I—like many reviewers, it appears—found that the story didn’t quite meet the soaring heights of the words used to tell it. The themes of the novel are complex, but the plot is a series of fleeting memories rather than a narrative, and every time we get a peek at the characters, they are snatched away from us. Still, as I said, I would recommend this book on the strength of the writing alone, so still a worthy read.

The Only Good Indians by Stephen Graham Jones

As much as I love horror, I don’t actually keep too close an eye on new horror releases apart from always picking up the latest Stephen King. I usually rely on recommendations or seek out older books, but when I saw this won the latest Stoker award and then saw it described as “seriously wild,” I couldn’t resist. Man am I glad. Disturbingly horrific and intensely creepy, this is not a story for the faint of heart, but it’s worth the ride. A tense, brutal story that also delves richly into a variety of characters, their regrets and their desires, I’ll be thinking about this for a while and definitely heading into Stephen Graham Jones’s back catalogue to explore more.

This short story collection is so intimate that it feels uncomfortable in places, like you are spying on something you shouldn’t be. At times tense and at others tender, most of the stories are loosely intertwined, almost a novella that weaves in between interconnected characters. A few of the stories stand alone—one, Anne of Cleaves, is probably my favourite—and all of them are written with the same vulnerable honesty that makes Tayor’s work so compelling.

The Scholar by Dervla McTiernan

Another installation in Dervla McTeirnan’s excellent Cormac Reilly series. While I found the case in this one to be a bit more contrived and less page-turning than the one in The Ruin, the character building and sense of place are top not and really create an atmosphere that makes this a compulsively readable book, well-paced and enjoyable.

A truly fascinating look into the largest human smuggling network in the United States. Masterminded by Sister Ping, a “Snakehead” who smuggled Chinese immigrants into the U.S. in a vast system of collusion, corruption, and profit. The story also traces the history and impact of illegal immigration, human trafficking, and the lengths people will go in an effort to better their lives and the lives of their families. It also covers the efforts of law enforcement, local, federal, and international, to crack down on this, and the difficulty in doing so. This book covers a huge number of topics, and gets slightly unwieldy in points, but the author’s impeccable research and writing style makes it clear to traverse this compelling tale.

A raw and powerful memoir by a fantastic writer. The way she is able to tap into her “inner child” and capture and convey the emotion is so good. It’s hard to listen to at points because of the things she goes through, but the way she tells the story with such clarity and honesty makes it so compelling.

Confession: I don’t really like stoner comedies or bathroom humour, so I haven’t actually seen that many of Seth Rogen’s movies. But somehow I’ve always been a fan of his anyway, and I loved this book. Naturally, it’s hilarious, but it’s also quite sweet and thoughtful and very clever. He’s always just seemed like a decent, likeable guy, even moreso lately (like for how he defended Emma Watson against accusations of acting like a diva) and that definitely comes through in this book while also being very, very funny. My only disappointment is that I didn’t listen to the audiobook because I imagine that’s even more hilarious, but I may have to give it a second go just for that opportunity.

A fun and interesting book about people who have tried (and mostly failed) to fake their own deaths, and what exactly it takes to do so. Feeling burdened by the weight of living (I mean, same) the author daydreams about just running away from it all, and then wonders if it is actually possible in this day and age to meet with a mysterious accident — or rather, appear to — and then go live the high life on a beach in some far-away land. It’s not very deep, offering mainly anecdotes from interviews with people whose insurance fraud exploits had been easily discovered, and the most interesting part — the process of her actually getting her own, authentic death certificate in the Philippines — comes only in the final pages but it’s an entertaining read overall.

(Re)born in the USA by Roger Bennett (audiobook)

A warm and thoughtful and unsurprisingly funny book about a childhood in Liverpool, an adulthood in America, and the coming of age between both. It’s mainly the former, and I wish there was more of the latter — the best part of the book is the epilogue, where he ruminates on loving a divided America, the way he was applauded by a certain unwanted faction of his twitter followers for the assumption he immigrated legally because he was white and wealthy when he really overstayed his visa originally, a reflection on how his dream of America has changed from childhood to adulthood and whether the USA of his childhood dreams ever really existed. I wish there had been more of this and less of his teenagehood dreams of hooking up with girls. But still an overall entertaining and enjoyable read.