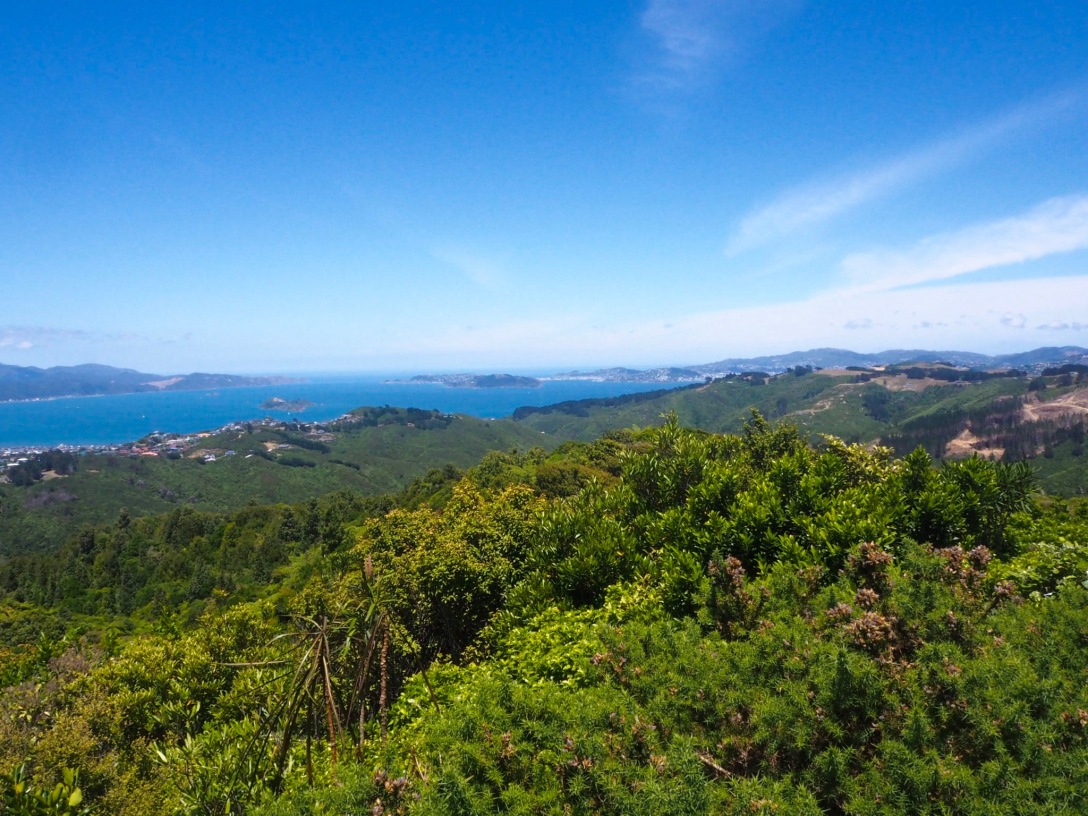 It’s been about a month and a half since Steve and I arrived in New Zealand on our 12-month working holiday visas and moved down to Wellington for the year. We’ve experienced a lot of cool things already—first time in Asia on our way over, first time in the Southern Hemisphere, first summer Christmas—and there are more to come—next week is my first summer birthday, and we’ll be spending it on our first overnight hike. This week our adventures are mostly stymied by rain and job-hunting, but I thought I’d take a break from firing off CVs and share a few of my thoughts on New Zealand so far.

We’ve been lucky enough to make friends with cars who have been kind enough to take us along to a few trails, and we’re going to look into purchasing a vehicle of our own, but even if you have no access to a car here in Welly, there are still a lot of great hiking options. The closest is Mount Victoria, only a few minutes’ walk from the CBD (and where the hobbits hid from the ringwraiths under a log in The Fellowship of the Ring), but there are numerous other hikes of varying lengths and difficulties only a bus ride away. The photos in this post are from a few of my favourite hikes we’ve been on around Wellington so far.

I always thought that flat whites were an Aussie invention, but according to Wikipedia New Zealand claims it as well, so I’m counting it. I’d heard of flat whites before coming to the southern hemisphere, but I’d never tried one and now I’m hooked. It’s like a latte but less milky, a cappuccino but less foamy, the perfect combination to create a delicious coffee. I only had one for the first time about two weeks ago, and I’ve probably had five since. Similarly, hokey pokey is basically honeycomb ice cream, but somehow it’s so much better. There are these little crunch pebbles of honeycomb that sort of pop in your mouth and create a delicious sweet tweet.

It’s inevitable: when you’re job hunting, you will get rejected. Not every position is the right fit. Still, even if a job is a reach, there’s nothing more annoying than getting the professional equivalent of being left on “read”. Now, I don’t know if it’s actually a positive of kiwi culture or a negative of other places I’ve gone job-searching, but I’ve already gotten a number of responses—positive and negative—to applications I’ve sent in. Obviously, getting rejected is never fun, but it’s so much nicer to know one way or another rather than wondering whether maybe you’re the ideal candidate but your application accidentally ended up in the spam folder.

I arrived in Ireland in the middle of October and the Christmas holidays were already in full force. I personally hate hearing holiday tunes or seeing decorations before December, so that was far too early for me, but it was equally weird at first to get to Wellington in December and see almost nothing festive. However, I came to appreciate the holidays happening in the middle of summer—the weather is warm so you’re not stuck at home, students are in the midst of a much larger break from school, and there’s definitely something to be said for a Christmas BBQ. It’s especially nice when you have great friends whose family takes you in for the day.

Wellington has 200,000 fewer people than Seattle and Vancouver—and when you include the metro populations both cities’ populations are closer to the entire population of New Zealand than they are to its capitol. I grew up in a small town and have lived in small cities, but I’ve gotten used to living in bustling metropolises so I was curious what it would be like to move back to a smaller city. If I had any worry that there wouldn’t be enough to do, my fears were immediately allayed when we checked into our hostel and found a summer night market going on outside. There are countless meetups, events, and other activities happening throughout the city. I can’t wait to explore even more!

Ever since I ran a half-marathon in 2016 I’ve been talking about running another. The truth is, I’ve barely gone running at all since that race. Vancouver weather isn’t conducive to runs (super hot summers, super slushy winters) and unsurprisingly, neither is living in a van. I realised when I came over here that I probably wouldn’t start running again unless I actually signed up for a race, so when a friend mentioned Round the Bays I immediately registered. I’m definitely nervous because I had 13 weeks of training from registration to race date for the Vancouver half, and only half that for Round the Bays, but I’m feeling confident and ready to run.

Overall, I’m having an amazing time in Wellington and New Zealand so far, and I can’t wait to see what the next year brings (hopefully a job). I’ll keep you all up to date!