As I have for the last three years (that I kept track of thanks to Goodreads) and probably for quite a few years preceding them, I’ve read at least book a week all year. Well, I’ve averaged at least a book a week. Some weeks I’ve read nothing because I was busy binge watching Jessica Jones or Bob’s Burgers. Other weeks I’ve stayed up way too late to finish a book in a night, only to start another the next morning. Either way, I’ve read 50 books so far this year, and I’m on track to read at least three more (the last couple Harry Potter books in my current re-read plus maybe a few others) before the end of the year, so it’s time to talk about my favourites, Here are the top 10 books I’ve read (for the first time) this year (in no particular order):

The Silkworm by Robert Galbraith – It’s not just because, as I mentioned above, I’m rereading Harry Potter that I’m thinking about how much I love J.K. Rowling’s writing. The second novel in her pseudonymously-published crime trilogy is a tight, tense thriller. Unlike the recent crime series by one of my other favourite authors, Stephen King, which (spoiler alert) sneaks back into the genre for which he’s most known, the Cormoran Strike series is pure crime, and it’s awesome.

A Girl is a Half-Formed Thing by Eimear McBride – This has been on my to-read list since it came out a few years ago and I finally got around to reading it a few weeks back. I wish I’d gotten to it sooner but it was worth the wait, Half poem, half stream of consciousness, this isn’t an easy read due to both the style and the content, but again, it’s worth the effort. 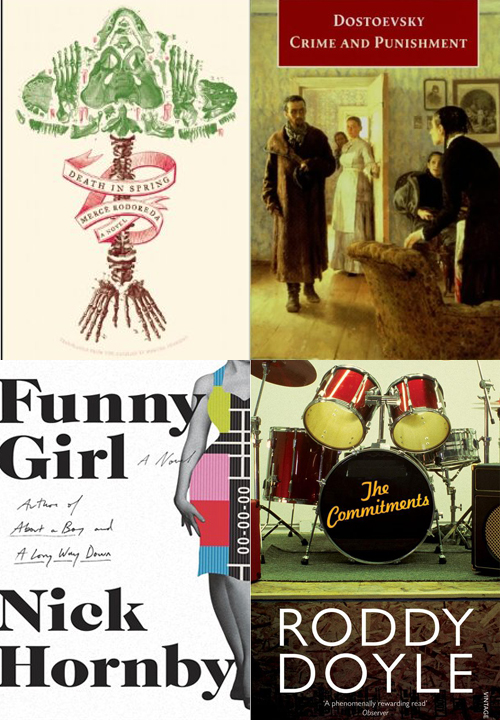 Death in Spring by Merce Rodoreda – My coworker recommended this to me with the pronouncement of “Best Book I’ve Read This Year.” While it’s hard for me to narrow my favourites down even for this top ten list, let alone pick a number one, but I can understand why he said it. A dark, surreal story full of magical realism and part-allegory for Franco’s dictatorship, this novel by one of Catalunya’s most celebrated writers can be read in a weekend but will stay with you for much longer.

Crime & Punishment by Fyodor Dostoevsky – The thing that always surprises me about Russian lit is how readable it is. I always expect it to be dense and dry it’s dense but also full of murder. I didn’t like Crime and Punishment as much as The Brothers Karamazov, but I still found it immensely enjoyable and I’m looking forward to reading more of Dostoeky’s work, and more work by Russian authors, in 2016.

Funny Girl by Nick Hornby – Nick Hornby’s books are always favourites of mine, with few exceptions, and Funny Girl is not one of those exceptions. His female characters have never really stood out to me in other books but there’s something so affecting about the ingenue-turned-comedienne protagonist of this one that makes her as memorable to me as a reader as it does to her fictional audiences.

The Commitments by Roddy Doyle – Roddy Doyle is one of the best contemporary Irish writers, whether in novels, short stories, or in clever dialogues about current events posted on his facebook. Steve gaves me The Barrytown Trilogy for Christmas and all three novels about the working-class Dublin family the Rabbittes are darkly comic and entertaining, but the first of the trilogy is the best.

Station Eleven by Emily St. John Mandel – My mom recommended this one to me. When I first started reading it I was surprised she enjoyed it so much; it’s certainly not her usual genre. It’s definitely mine, but it just goes to show that this book is good enough that it finds fans who wouldn’t usually look for dystopian fiction. So even if it doesn’t sound like your thing, it might be worth a look.

Uprooted by Naomi Novik – Adult fairy tales are as trendy right now as adult colouring books, which I love, but many of them fall flat for me trying to make “edgy” versions of classic stories. If I wanted a darker version of the Little Mermaid, I’d reread the original. Uprooted, unlike these retellings, is an original take on classic fairy tale tropes, and it’s dark and spooky and absolutely magical.

Nos4A2 by Joe Hill – Speaking of dark and spooky, this book creeped the hell out of me. It started off slow—I actually tried to read it a time or two before I actually got through it and put it down because it didn’t grab me even though I love the rest of Hill’s books—but once I was into it, I couldn’t stop.

The Raven Boys by Maggie Stiefvater – The Raven Cycle is the uber-hyped Young Adult series du jour (what a multilingual clause!) and it deserves that hype. I was hoping I’d be able to read the fourth book in the series this year but unfortunately its publication has been pushed back until April 2016. But that gives you plenty of time to get up to date! And me time to reread the first three, probably.