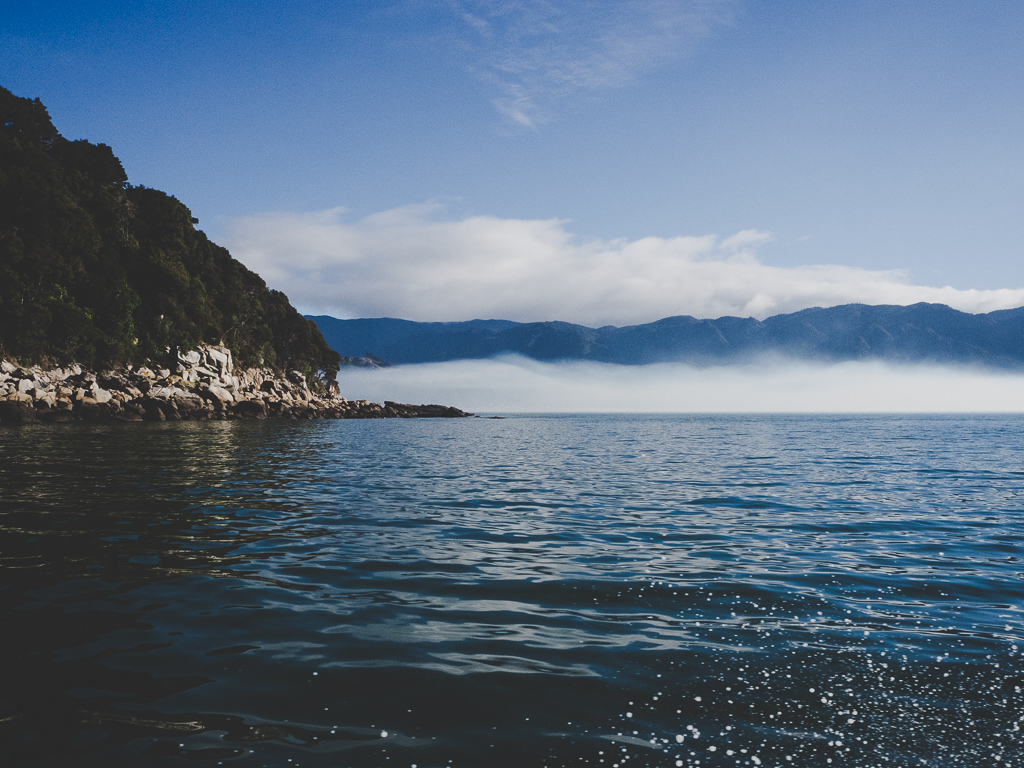 Abel Tasman National Park is one of the busiest spots in New Zealand, with upwards of a quarter of a million visitors per year spending at least a day in the park in recent years. However, the vast majority of these visitors come in summer, to enjoy the beautiful golden sand beaches and warm water for kayaking and swimming. Last week, in late autumn, it was nearly empty, and it was a wonderfully peaceful way to experience one of New Zealand’s most stunning regions.

Our trip started with a water taxi from Marahau to Totaranui Bay. We decided to go from north to south because it offered more flexibility; we could take the morning boat and when we got back to Marahau three and a half days later, we’d be back at our rental car and ready to return to Nelson. The water taxi trip was great, taking us to the famous Split Apple rock as well as to see baby seals playing in rock pools near an island just offshore.

I already wrote plenty about our experience between Totaranui and Awaroa hut, but even though the rest of the trip wasn’t as dramatic, there was still so much to see and do. Abel Tasman is full of flora and fauna, beautiful vistas and lush forest, and to be there in such a quiet time (there were days when we didn’t see anyone from the time we left the first hut until the time we reached the next) was amazing.

Our second day in the park took us 13.5km from Awaroa to Bark Bay. Unlike the previous afternoon, day two was warm and sunny. The trails in Abel Tasman are well-marked and don’t have much elevation climb, so the hike itself is not difficult and leaves plenty of time to enjoy the scenery. There are also a couple of fun bridges to cross over estuaries and streams.

We arrived in Bark Bay to find a family had already arrived at the Bark Bay hut and started a fire in the stove, making the lovely space extra nice and cozy. After sunset, we walked out to the beach at Bark Bay to take some photos of the night sky using my camera and tripod. Across the Tasman Bay, in the distance, there was a thunderstorm and with a little luck and a lot of mistimed shots, I managed to capture it in one photo.

The start of our third day in the park was a bit grey and drizzly, but as the morning went on the weather cleared up and the sun hitting the last of the raindrops made for some beautiful rainbows.

Day three featured a couple of side trips as we hiked from Bark Bay to Anchorage. We climbed up a steep and less-traversed trail to visit Cascade Falls, as well as taking a much more leisurely ten-minute detour to Cleopatra’s Pool (which must be an amazing place to take a cool dip in the summer).

Anchorage Hut was the busiest and most well-outfitted of the locations we spent the night. Although none of the huts have cooking facilities, they do have flush toilets (although usually a short walk from the huts themselves) and Bark Bay and Anchorage both had a few solar-powered lights). This hut even had solar-powered mobile phone charging cables, which is something I never expected to see.

The final day, from Anchorage back to Marahau, was quick and easy, and we enjoyed burgers at The Fat Tui before heading off to Nelson for the night. A couple of weka, a kiwi-like bird that we had seen throughout the trip, tried very hard to steal our sandwiches.

Having previously done an overnight hike only once before, four days and three nights in Abel Tasman was definitely a new adventure. And so worth it. If you’re okay with chilly weather and love tranquil solitude, I definitely recommend exploring a national park in the offseason. Not only is it easier to do (we booked our huts a few weeks ahead of time, whereas in the summer they fill up months in advance; on other trips such as our road trip we were able to take advantage of first-come-first-serve campsites in parks like Yosemite that become highly in-demand book-ahead sites during peak season), but it’s a great way to enjoy the beauty and power of the site without crowds of other people. And if you choose to go to Abel Tasman, you’ll surely be in awe of the wonder of the world that you encounter.