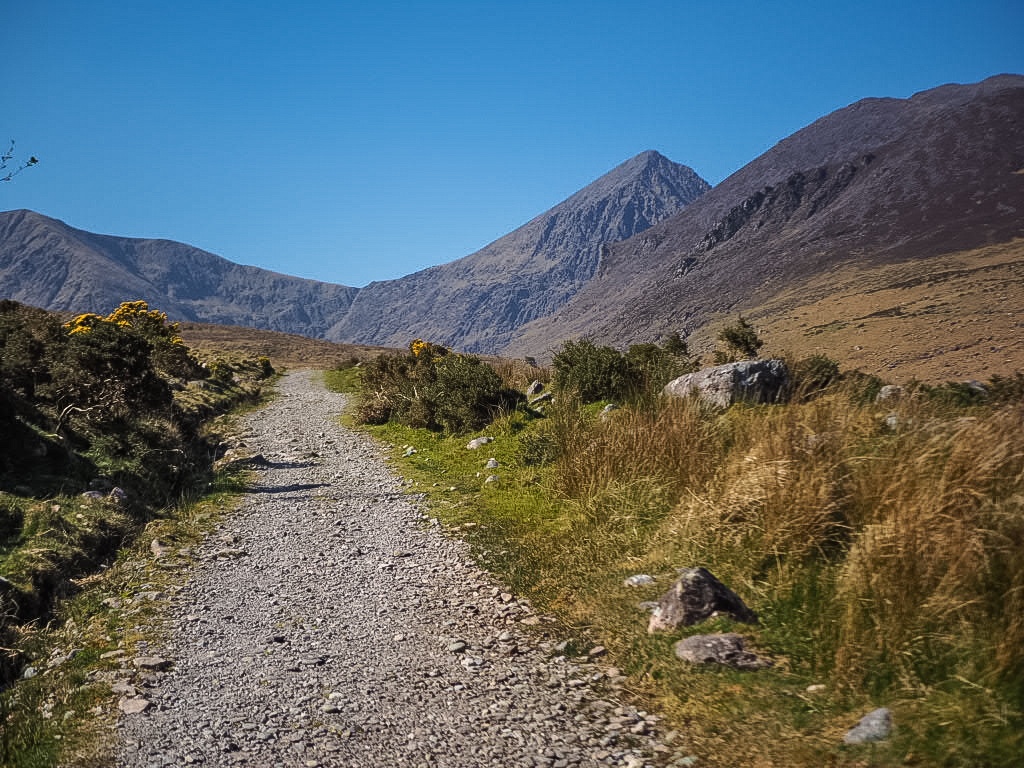 The way the weather was this weekend, you’d be forgiven for thinking the southwest of Ireland was situated somewhere closer to Spain. Devastatingly, the dry, hot conditions have left a wildfire burning in Killarney National Park for the past three days and nights, but overall the warm weather has done wonders for everyone’s mental health and outdoor to-do lists. Now that the 5km travel restriction has finally been lifted and we’re free to roam around our county, a good-weather weekend was just what was needed to really take advantage of it.

While many folks in the area headed to the costa del Kerry to enjoy the sun in Ballybunion or Banna beach, Steve and I took to the mountains yet again for my third trip up Carrauntoohil.

Our original plan for the day was a looped hike near Sneem that I’d read about online, but when we saw the clear, cloudless skies, we couldn’t resist Ireland’s tallest mountain. Even on good days, the mountains are often covered in fog and mist, so you have to jump on your opportunities for views across the county when you get them.

We arrived at Cronin’s Yard (the carpark at the trailhead, a reasonable 2 euro for parking and there are also toilets as well as a small shop) just before 11am and it was fairly packed. Luckily, because there are a number of routes up the mountain (with the Devil’s Ladder being the most popular) and because most folks had started earlier (judging by the number of groups we passed on their return along the start of the trail) we didn’t anticipate a crowded hike.

All the routes approaching Carrauntoohil from the front begin along the same path for the first kilometre and a half or so, and then the O’Shea’s Gully route is the first to turn off. Just before a small creek crossing, we left the main trail in favour of a narrower, rockier path that travelled straight ahead in the direction of the peak before veering off and up to the right of the mountain (whereas the Devil’s Ladder, for example, approaches Carrauntoohil from the left).

There are one or two spots here where I had to do a proper climb, which was a bit scary as the wind was strong. But it’s really only a step or two, pulling yourself up with your hands, and then you’re back to scrambling/hiking terrain between Carrauntoohil and the Hag’s Tooth Ridge. From here, trek up the scree until you reach the a flat area between scree climbs. I found this climb easier than the Devil’s Ladder because there were more flatter sections where you could stop on the way up, and also because it was far less crowded so I didn’t feel like I had to worry about someone slipping above me (or a kid kicking off a rock without thinking).

Next is is another long but not treacherous scree scramble. There are lots of small paths along this portion so you can take the route that feels most comfortable to you. When we reached this section we saw the Kerry Mountain Rescue Team doing some training exercises, strapping a dummy onto a backboard and setting up rock climbing gear. Just beyond this is Cummeenoughter Lake. We stopped for lunch here because it was somewhat shielded from the wind.

The last section is the one that actually takes you through Brother O’Shea’s Gully. There are two other gully options from this point, with Curved and Central Gullys being more strenuous. Brother O’Shea’s is the farthest to the right and therefore brings you up farthest from the summit of Carrauntoohil, but it’s also the easiest, with a mix of compacted scree and grassy ground, and it’s fairly quick to ascend to the top of the ridge. On a good day like we had yesterday, we were greeted with views across the other side of the Coomloughra Horseshoe to Caher mountain, and even beyond that to Rossbeigh and Inch beaches.

We turned left and trekked along the saddle up to the summit, which we were pleasantly surprised to see was not at all crowded (only two other groups up top at the same time as us). After another brief break (it was very windy up top so we didn’t want to spend too long there) it was time to start down the mountain.

We decided to go down the Zigzags because it’s easier on the legs. This is the easiest, although least exciting route. Starting down from the summit in the opposite direction as the one we’d come up, we walked to the point where the Devil’s Ladder route reaches the saddle and then continued on, up the next hill and along that ridge. Just before the route goes on to the next peak, a trail cuts down the mountain on a diagonal. It then, as the name suggests, zigs and zags back and forth to the bottom. Then, simply follow the main trail back (passing the turnoff to the Brother O’Shea’s route on the way) and return to Cronin’s Yard.

Carrauntoohil via Brother O’Shea’s Gully and the Zigzags is an approximately 17 km, 6 hour hike that I personally liked more than the Devil’s Ladder route, although it still didn’t compare to the amazing Coomloughra Horseshoe route. A decent level of fitness and a good amount of comfort with scrambling and scree is needed, although overall it’s a reasonably straightforward hike.

This is the first time we’ve been up Carrauntoohil in 2021, but I’m sure it won’t be the last. Looking forward to our next trip to the top!