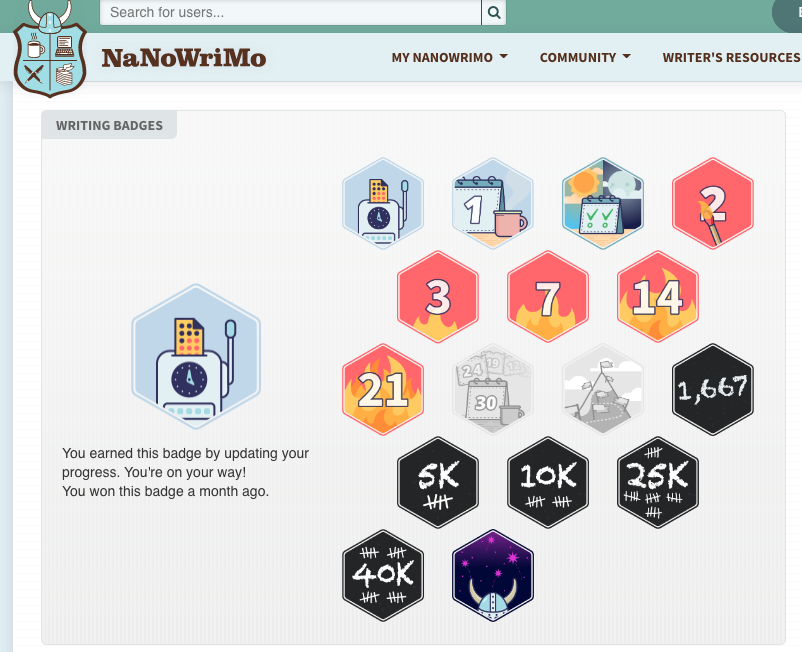 2020 has been, I don’t need to tell anyone, a weird year. There have been days when moving from the bed to the couch has seemed a herculean feat, days when the effort of pouring a bowl of soup from a can has been similar to the work put in to make a five-course gourmet meal. There have also been days when things have gone swimmingly—exercise, cleaning, work, play, all sorts of productivity in a single 24-hour period, with minimal doomscrolling in between. It was in anticipatory hope of a strong of days like that which made me decide to sign up for NaNoWriMo once more.

I’ve got this great app called Countdown Star on my phone that I love. You input an event and it how many days there are until the date (or from the date, if you’re counting up from the day of your birth or whatever past occasion you want to celebrate or remember). 19 days until Steve and I go to Japan. 59 until we go to Tasmania to hike the Overland Track, 11 days since we got engaged (oh yes, did I not mention? …more on that next week), 10,457 days since I was born, and so on. And today it is exactly 500 days until I turn 30. Because I’m me and I love a good list, of course that called for one. A short-term bucket list of sorts, 30 things I want to do between now and 500 days from now, when I leave my twenties and join the world of thirty, flirty, and thriving.

I won’t share the whole list as some things are quite personal, but here are some of the items I plan to check off:

END_OF_DOCUMENT_TOKEN_TO_BE_REPLACED

I have no idea where September went, but somehow it’s the first week of October, and that means the year is three-quarters over. Because I am a to-do list-making, bujo-obsessive, I’m already taking stock of the year. I can barely handle to even think of current affairs at the moment, but I am glad to look back and forward at my own year. Here’s a brief list of things I’ve done:

END_OF_DOCUMENT_TOKEN_TO_BE_REPLACED

September is flying by. Two months from now, Steve and I will be leaving New Zealand and heading to Australia (visas pending… should probably get on applying for those). In the meantime, we have two trips planned (well, one planned and one planning-in-progress… can you tell I’m a bit behind on my to-do list?), heaps of people to spend time with, and a couple more items to cross off the kiwi bucket list.

The weather’s also starting to warm up (yay!) which has meant that my Septemberwrimo goal has gotten slightly off-track. Only slightly, I’m at ~24,000 words and I expect I’ll hit 27,000 at least by the time the month finishes, but I have no desire to sit inside on my laptop when it’s sunny and there are mountains to climb. But that’s not important. Even if I only write one word in a day I try to celebrate it, because it’s one more word than I had on the page before.

END_OF_DOCUMENT_TOKEN_TO_BE_REPLACED

We all have excuses for why we don’t write. Work, kids, Netflix marathons, there just aren’t enough hours in the day. I’ve written before about how difficult I find writing for fun when I write for a living. And yet, for one glorious, stressful month a year, we put all our excuses decide, meet up with friends and strangers in coffee shops and on twitter, and try to bash out 50,000 words for National Novel Writing Month.

END_OF_DOCUMENT_TOKEN_TO_BE_REPLACED

About a year and a half ago I ran my first half-marathon. Then I all but stopped running. It’s not that I don’t enjoy running, because I obviously do or I wouldn’t have run a half to begin with, but first I was taking a break after all that training; then the weather was too hot; then too cold; then we were living in a van. Next thing I knew it was a year and a half later and I hadn’t run in ages. When I moved to Wellington I decided to sign up for the Round the Bays half, convinced Steve to do the same, and started running again. I learned a lot from the Vancouver Half-Marathon, my first-ever race, but I still picked up a few new insights this time around.

The first thing I learned is that in some ways, it is like that old adage about riding a bicycle. Obviously you’re not going to jump back into running after not training for ages and immediately be able to run that whole 13.1mi/21.1km, but running a race requires mental training as well as physical. Before training for my first half-marathon I had never run 13.1 miles before. The longest run I could find in my Runkeeper records was 10 miles, way back in 2012. Usually I topped out around 5 or 6.

Training for my second half-marathon was different because I knew I could finish it. I had a good suspicion that I could back in Vancouver, but for this one I already knew because I had done it before. Getting over that mental hurdle (running pun, ha ha) made it much easier to jump into training and push myself toward that 13.1 mile goal.

While the first thing I learned came at the very start of my training for Round the Bays, the second arrived at the very end, as I crossed the finish line. I ran my first half-marathon in 2:08:12. That time around, I didn’t have a goal time because I had no benchmark for how fast I was and I just wanted to finish. This race, my goal was to finish in two hours or less. And… I didn’t. According to the official race results, my final time was 2:00:42. Just 42 seconds longer than my goal: close, but not quite there.

I’m a perfectionist, and I hate not meeting my own expectations. There are a lot of excuses that can be made– a serious head wind for most of the course, a rumour that the track is just a bit longer than a half-marathon (and the GPS on my phone would seem to back that up)–but at the end of the day, I just didn’t quite get there. Usually I’m pretty hard on myself when I “fail” at something, so I expected to feel disappointed that I didn’t achieve my goal.

Instead I felt proud and excited. I cut seven-and-a-half minutes off my previous time, with half as much training as I did for the last race. I also felt energized–after my last half-marathon I felt like there was no way I could see myself running a full marathon in the future. Now? It seems like a definite possibility (with a good bit more training first, of course). I’m happy to celebrate my victories instead of dwelling on my “failure,” and now I have a goal to work toward in my next half.

My main goal is to not stop running for over a year like I did after the Vancouver half. I’m enjoying a week off from running this week to rest and recharge, but I’m looking forward to getting back to it next week and breaking that sub-2 hour barrier in my next race for sure! And maybe then I’ll be ready to turn 13.1 into 26.2! Or not, but I’ll be glad to succeed or fail at whatever comes next.